This is a few weeks old, but it’s still lots of fun!

Joe went through a phase where animal noises cracked him up. Especially barking and oinking.

I’ll do anything for a laugh!

Joe enjoyed his first Christmas at my parents’ house in North Carolina. He tried some new foods (bananas rule!), heard some new stories, played with some new toys and got loved on a lot.

Here he is enjoying a laugh with his Dad:

You can’t tell from the video, but he really has been wearing his glasses every day and doesn’t seem to mind them too much. What a good boy!

Joe’s  ophthalmologist says that he has astigmatism and slight nearsightedness. That’s not enough to explain why he doesn’t “track” objects very well, or see more than a few feet away, but he’s supposed to try glasses to correct them anyway.

The doctor thinks that making a less blurry view for the brain to interpret might stop the wiggling and crossing of his eyes, the two things that are probably making it hard for him to see.

How cute is this!

We hadn’t planned to start giving Joe solids until he was 6 months old, but this morning I had him weighed with me at Weight Watchers (I’m down 0.8 pounds, the week after Thanksgiving, thankyouverymuch) and he was just 14.8 pounds. According to this calculator, that’s between the 5th and 10th percentiles.

It’s not an alarming number (he doesn’t look like this kid!) but at his last checkup he was in the 25th percentile — so he might need to fatten up a bit for winter.

And anyway, he turns 6 months old next week!

So tonight Patrick and I gave him his very first taste of solid food. I use the term “solid” loosely here — the rice cereal (which looks like fish food, or instant mashed potatoes) is mixed in a 1 to 4 ratio with milk, so it’s more like egg nog than food.

He seemed a little perplexed by the whole thing, but he got most of it down before completely losing interest.

Tomorrow, he gets pizza! 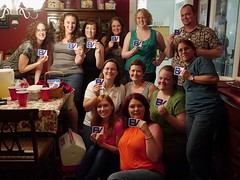