Here’s what Joe looks like in there at 23 weeks. He has eyebrows already, can you believe it?

I’ve been enjoying some really crazy mood swings lately. Tonight at the dinner table, I burst into tears for no reason at all. Patrick took me to the couch and hugged me until I felt better, and managed not to laugh at me until I had cried it all out.

The nursery is all painted now, and it’s so cute! Patrick noted that it matches the cover of Joe’s first book, which Patrick went out and bought for him as soon as we found out we were pregnant:

Patrick found a Web site that will help him get ready for being a dad: Do’s and Don’ts with Babies.

I might print some of these out and post them around the house, just as a reminder.

Here’s a fun challenge for you. This site lets you see short video clips of 20 different people (some of the oddest looking people you’ll ever see, incidentally) breaking into smiles. You have to guess which ones are real and which ones are fake. I got 14 out of 20 right!

Joe cooperated fully with the ultrasound tech this morning, letting her get all the shots she needed of his little heart and kidneys. His heart was pumping away in there and I could see all four perfectly formed chambers. What an amazing thing to see!

Once all the organ-examining was over, the tech got a few fun photos for me to take home. Here’s his baby face in profile — you can even see a little eyeball!

He’s looking to the upper left of your screen. Look at that sweet nose!

He was quite the wiggle worm, moving all over the place. He yawned twice (who knew they yawned in there?) and at one point had the back of his hand draped dramatically over his forehead, like “Enough already!”

Oh, and I do believe he’s developing his father’s feet:

More than a week since my last post! Sorry about that.

We spent the weekend in chore mode, running to Lowe’s and Home Depot for various little projects. Patrick has started painting the nursery (a lovely apple green, to go with the green dots in the bedding) and can be heard in there at night with the doors closed, singing at the top of his lungs as the brush goes back and forth.

As for me, I’ve been getting organized by starting our taxes, laying out the year’s budget and getting rid of old files. Sort of a beginner’s nesting phase.

Ooh, I’ve also found a new favorite Web site. Paperback Swap lets you list any old books you have lying around (they don’t have to be paperbacks, despite the name) and other users can request them from you. When someone requests yours, you drop it in the mail (at the super-cheap media mail rate) and get a credit to request one from someone else. I listed 20 books or so on Friday night and this morning I’m headed to the post office with 10 of them. So that’s 10 books I get to order in return. I’ll never pay for a book again, at this rate!

Speaking of books, last week I finished Water for Elephants, which was set in a 1930s traveling circus. What a lovely book — I highly recommend it.

Now, I’m the last person on Earth to finally read The Kite Runner, a story of two boys who grow up together in Afghanistan in the 1970s. On Saturday morning I came to an incredibly heartbreaking scene and had to put the book down and have a good cry. It’s supposed to get happier toward the end. It better!

On Saturday night, I was on the couch reading next to Patrick when Joe suddenly gave me some fierce kicks in the belly. I pushed my waistband down to see if I could see it from the outside, and I did! I grabbed Patrick’s hand and put it there so he could feel. Of course, Joe immediately stopped. Then as soon as Patrick took his hand away, BOOM BOOM, Joe kicked me again. It’s happened every day since and while I love staring at my belly and seeing the little lumps pop up, I wish Patrick could see and feel it too. Soon!

This morning I have an ultrasound, a follow-up to the one we had two weeks ago (was that just two weeks ago?) so that they can get a better look at Joe’s heart. I hope I’ll come away with more photos to share (of the cute profile variety, not the scary Skeletor kind).

You ever have one of those moments where you think, “Man, it just doesn’t get better than this,” even though nothing out of the ordinary is going on? Last night was like that for me. The house was clean, Patrick and I were in bed reading, the dryer was humming away in the background, Lola was snoring at our feet, and Joe was doing a little bedtime water ballet. Everything was perfect.

That’s the sort of quiet moment I know we won’t have many of for a while after May, so I made extra sure to savor it!

Earlier, we had cleaned out a bookshelf in the guest room, getting it just a little closer to being Joe’s room. I’ve been looking at crib bedding, and while a lot of it is cheesy or downright scary (would YOU want to wake up with a Care Bear staring you in the face every morning?), I think we’ve found something that’s cute and a little more understated. What do you think:

It’s also gender-neutral, which is great in case Joe gets a little sister in a couple of years. We don’t want to buy all-blue now and then have to buy all-pink later on.

Ooh, we saw a really good movie yesterday: The Orphanage (El Orfanato — it was in Spanish with English subtitles). It was all kinds of scary, but there was a very touching backstory behind it and I thought the two were very well balanced. Plus, the whole thing was filmed in Catalunya, the region of Spain where I spent a high-school summer as an exchange student.

Still, with a guy down the row not only leaving his cell phone on but answering it mid-movie, and the family behind us not only bringing a 4-year-old to a terrifying movie but letting her talk through half of it, I’m even more convinced that they should just start releasing movies directly to home viewers. If that bad behavior is going on in the matinee foreign film, imagine the shenanigans in the Saturday-night showing of some blockbuster. It used to be fun to do the whole moviegoing experience, but now I prefer to watch movies in the quiet of my own house, thank you very much. And not miss anything if I have to pee. So God bless you, Netflix.

My sister is coming to visit on Feb. 2-3. The three of us are going to see Ira Glass at the Modlin Center (on the campus where I work) and then the next day she and I will go see this:

That should scare the bejeebies out of me, don’t you think?

Patrick has been having entirely too much fun with our new camcorder. If I’d known he was shooting the credits for our new sitcom, I’d have cleaned up a little.

Enjoy! (Make sure the volume is up.) 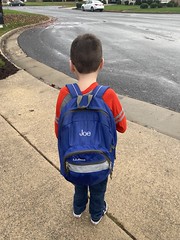 Joe Tremblay
Create a free website or blog at WordPress.com.